Ash, real name Ashly Burch, is an actress and star of the webseries Hey Ash, Whatcha Playin'? who appeared as a guest on Table Flip in their play through of Coup and One Night Ultimate Werewolf RETURNS. She also appeared briefly in the "rap-along" video for the Starbomb song I Choose You to Die. Burch is perhaps best known for her role as Tiny Tina in the Gearbox game Borderlands 2. In the game, Tiny Tina is an insane 13-year-old girl who loves tea parties, stuffed animals, and explosions over everything. 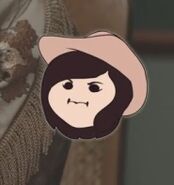 Ash's "Grump Head" from Table Flip.
Add a photo to this gallery
Retrieved from "https://gamegrumps.fandom.com/wiki/Ash?oldid=73567"
Community content is available under CC-BY-SA unless otherwise noted.