The Grump Room is the name given to whatever room is used to record Game Grumps episodes. Currently the official Grump Room is located in the Grump Office, but it was originally located at Arin and Suzy's house.

The original Grump Room has a couch where the Grumps sit as they play their games. In front of the couch is an entertainment stand, holding the two TVs the Grumps use, and their many consoles. Above the TVs are a few shelves, holding games, toys, and a few handheld consoles. Next to the entertainment stand is a desk with a computer, used by Arin and Barry to make animations and edit Game Grumps, respectively. To the right of the couch is Arin's wall of games, literally taking up the entire wall. Behind the couch is door leading out of the Grump room, and a wall filled with framed pictures, as well as a fireplace. On the wall to the left of the couch, are shelves full of action figures and other collectables Arin has.

It has also been used as the setting of live Game Grumps, Egoraptor, and JonTron videos, as well as other YouTubers who are friends of Arin's, such as El-Cid.

After moving to the new Grump Office, the original Grump Room has reportedly become Arin's office, with Suzy using the same room for her taxidermy projects.

Soon after the acquiring of the Grump Office, the Grumps opened up the new Grump Room where they'll be recording new episodes of the show in and where they've transferred most of their games to. It is where all current Game Grumps shows are recorded at, including Steam Train and Grumpcade, as well as KittyKatGaming.

The current Grump Room is much more high-tech, with soundproof padding on the walls for acoustic purposes, and an adjacent monitoring room where the actual recording happens. The room features a Sony WEGA television for playing retro games, and an Insignia HDTV for playing PC games and high-definition games. The devices are also connected to an Elgato capture device to capture the footage. The room also features a secondary monitor that shows whether gameplay and audio is being recorded, and three microphones. There is also a timer that informs them how long each episode has been running, which is allegedly prone to errors.

The Grump Room was remodeled in mid-2016, with completely new lighting and a reorganized layout.

Jon and Arin sitting on the couch. 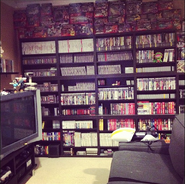 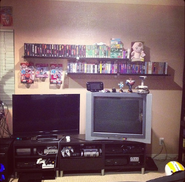 The TVs and consoles used 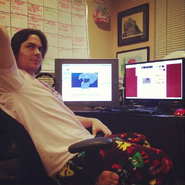 Arin working on Pokeawesome 2 at his computer. (Onix on screen) 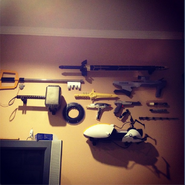 Add a photo to this gallery

The Old Grump Room can be seen in:

The New Grump Room can be seen in:

The Newly remodeled Grump Room can be seen in:

Retrieved from "https://gamegrumps.fandom.com/wiki/Grump_Room?oldid=78928"
Community content is available under CC-BY-SA unless otherwise noted.