Holly has been mentioned multiple times on Steam Train by Ross and Danny. During the announcement video for the new Game Grumps and Steam Train shirts Arin and Danny are using several props which were created by Holly. During the same video, a poster from Morgan Spurlock's documentary Comic-Con Episode Four: A Fan's Hope can be seen in the background, which Holly was a main cast member of. Holly has appeared alongside Danny in the first episode of Friend Zone, and again in the third episode of Friend Zone. She also had her first appearances on Game Grumps as a part of Grumpcade, and in the Steam Train spin-off, Love Train. The video featured a double date with Holly and Ross, and Arin and Suzy during the 2015 Valentine special. She was also featured in the video Making of Kaiju joined by Jon and Arin.

Currently Holly runs her own YouTube channel "Commander Holly" where she plays games and does crafting and cosplay tutorials. Ross is frequently a guest as well as other friends.

Holly is also known as a cosplayer. She is known for cosplaying as Commander Shepard from the Mass Effect series created by Bioware. Holly was Bioware's official Commander Shepard during 2011 and 2012. She also created multiple costumes based off of the series, including Grunt and Wrex.

Holly is also a special FX artist. Some of her notable work includes designing and creating a Kaiju for the promotional video Pacific Rim - Training Day and various creatures for a series of videos entitled The Four Players. She also worked on and helped create The Holodeck, another show on the Polaris network. She has also worked on the Adult Swim show Titan Maximum. This was briefly mentioned in the Valentine's Day episode of Grumpcade.

She is now currently one of the members of a DnD group; Dice, Camera, Action, along with other members such as Jared Knabenbauer, Nathan Sharp, Anna Prosser Robinson, Chris Perkins the Dungeon Master, and many frequent guest stars. Shows every Tuesday, on Twitch, 4pm ST

Holly has made a few appearances on the Game Grumps channel, and was almost always accompanied by Ross when she does appear, with the exception of her appearances of Table Flip.

She appeared in two of the Valentine's Day 2015 videos. Notably, she was the first guest on Steam Train with her appearance on Ostrich Island.

Holly also has a significant role in Guild Grumps, to take over for Suzy, who had dropped out from Day 4 onward. Her involvement and teaching were instrumental in Arin and Barry getting the most out of their final two days playing World of Warcraft.

On May 9th, 2019, ProJared's now ex-wife Heidi O'Ferral claimed that Jared and Holly had been in a secret relationship for months.[1] This news came roughly six months after Ross and Holly announced that they would be separating in September 2018. Holly later stated in response to this that she would be leaving Twitter for a while, and marked her account as Protected for a while. It was stated by ProJared on Twitter that she had allegedly been in a polyamorous relationship with him that Heidi at first consented to, but later changed her mind on, though Heidi later denied the claim.

“I feel like I'm trying to give it a very gentle handy.”
— Holly Conrad 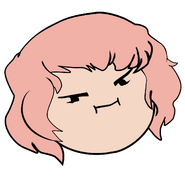 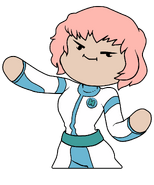 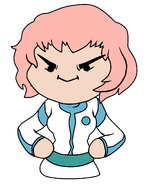 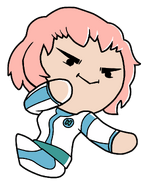 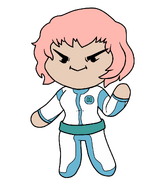 Holly on the 4-player selection screen 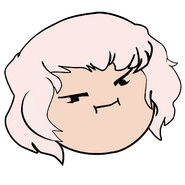 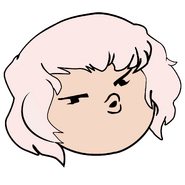