Seán William McLoughlin (born February 7, 1990), better known as Jacksepticeye, is an Irish YouTuber and Let's Player, best known for his eccentric personality ,catchphrases, green hair and for his character named "Antisepticeye" which fans just call "Anti". He is one of the most popular let's players on YouTube, with over 20 million subscribers. His first video was a Solid Snake impression.

Jack has been mentioned by the Grumps on a few occasions, usually when also talking about the Grumps intern Jack, who is also Irish.

Jack appeared as a guest via Skype during the "Horsey Give Grumps" stream.

Jack was a guest on Grumpcade, in which he played Shadows of the Damned with Arin and Barry.

The Grumps asked Jack to go on the Ready Player Three tour with them.

Jack starred in the music video for the Ninja Sex Party song "Cool Patrol". In the video he is shown being bullied in a roller blading rink when Danny attempts to teach him how to be cool and stand up to them. However, his instruction proves unhelpful, as his character is implied to be killed by the bullies off-screen. 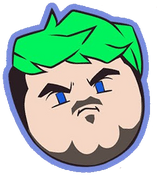 This article is a stub. You can help Game Grumps Wiki by expanding it.