Jonathan "Jon" Jafari (born 24 March 1990), more commonly known on the internet as JonTron, is an entertainer the co-founder and former co-host of the show Game Grumps, alongside his friend Arin Hanson. Besides Game Grumps, he is known mostly for his game reviews and being a founder and ex-member of the community known as NormalBoots.

Jon started his show in 2010 with a standard review of the video game Daikatana, but he didn't gain internet popularity until he retooled the series with a more original style. After a fan posted Jon's "DinoCity BRO!!!" video on Reddit with the description "After watching this, video game reviews really aren't the same anymore," Jon's popularity boomed. This is also when Jon's videos were first brought to Arin Hanson's attention. He was a grump, ironically, since he played the role as the original "Not-so-Grump".

Barry was Jon's primary creative partner in the early days of his show, which lasted up until he decided to leave Game Grumps and move to New York. Afterwards he wrote and produced most of his episodes with Paul Ritchey and the rest of the Continue? crew. Today Jon's primary co-writer is Zach Hadel, better known as PsychicPebbles .

Jon is the co-founder of the NormalBoots alongside PeanutButterGamer. NormalBoots was briefly shut down as YouTube's partner program became a much better way to earn money than ad revenue on NormalBoots. However, it has recently been resurrected due to uncertainties surrounding the long-term viability of being dependent on ad-revenue from a site that is becoming increasingly mired in copyright controversies that could potentially end up shutting down channels such as Jon's. Jon has appeared in videos of fellow NormalBoots member "Continue?", and he has also done many voiceovers for episodes of "Did You Know Gaming?". In May of 2017, it was announced that Jon was officially leaving NormalBoots to work exclusively on his show, and NormalBoots continues to honor him as an honorary co-founder.

Jon started contributing to Channel Awesome in 2011, working on the subdivisions "That Guy With The Glasses" and "Blistered Thumbs.

Since his departure from Game Grumps, Jon became infamous for voicing controversial political views on social media, such as his opposition to contemporary feminism and the social justice movement, as well as appearing in an interview on the far-right publication Breitbart. In early 2017, he defended Republican congressman Steve King and his anti-immigrantion comments,[1] and appeared on a livestream together with antifeminist YouTuber Sargon of Akkad, in which he described the participants in the Women's March as "fucking commulists" [sic]. [2]

In an infamous debate with Twitch streamer Destiny, Jon further elaborated on his anti-immigration stance, claiming that white people could eventually become a minority in the United States, and that it was against their best interests to accept immigrants from "incompatible places".[3] He also (falsely) asserted that wealthy black men commit more crime than poor white men in the US, and that Mexicans intend to break off territory from the southern United States back into Mexico.[4] These comments led to some of his associates distancing themselves from him, including Playtonic Games, who removed Jon's voice cameo from their game Yooka-Laylee.[5] However, since late 2018, Jon has become significantly less outspoken about politics on his social media accounts, and has since apologized for his comments.

In the latter half of 2017, Jon has acknowledged his show is no longer simply focused on games, and would now focus on a variety of content such as movies and television shows. He also provided a voice cameo for the independent 3D Platformer A Hat in Time.

Unlike many reviewers on YouTube, Jon has an energetic and random approach to his videos. Much like PeanutButterGamer and The Angry Video Game Nerd, Jon usually chooses obscure, unknown or just plain bad games to review on his channel. He starts his videos in random matters, whether as simple as playing with Barbie dolls in his Barbie Games video or completely weird like when the ghost of Macaulay Culkin came to him through over-cooked nuts in his Home Alone Games video.

Throughout the video, he usually assesses the games in calm and collected matter, explaining the things he likes and the things he doesn't. However, when things become weird, scary or rage-inducing, Jon either cracks a joke on what he's just seen, gets up to leave and comes back a few seconds later, or screams and shouts at the top of his lungs while babbling random nonsense or letting out his signature 'Ech!'.

As the video ends, Jon doesn't give his opinion on the games. Much like the start, he ends his videos in random ways, as shown when going through an LSD-induced space trip or getting his soul eaten by a Haunter inside a Pokemon creepypasta cartridge.

Jon is educated in musical theatre. He will occasionally display his musical talent in videos that he produces, as well as many episodes of Game Grumps.

Jon made a cameo appearance in a Pepsi commercial with Mike Tompkins, where he appeared along with many others singing the tune "Take Me Out to the Ball Game" in honor of the 2013 World Series. The original publisher of the video, Maker Music, had posted in the video's description a link to Jon's YouTube page, asking fans to get him to sing the National Anthem for the World Series.

“All the Jews and whites and blacks and Asians and Latinos should all die.”
— Jon Jafari, It's Retro
“You died in a fucking shallow pond, you piece of shit, you imbecile, you useless piece of fucking oats!”
— Jon Jafari, Average Velocity
“Well, to be honest this would be one of the only shows someone without eyes could enjoyably watch, so maybe we have a pretty big eyeless demographic that we just insulted... they're probably gonna fucking get on their computer and comment "difigitdifgitifffitigffidd".”
— Jon Jafari, Eye See What You Mean
“One, two, three, four, five, six, seven... seven asses.”
— Jon Jafari, Seven Asses.
“Arin, do you remember that part where neither of us are funny?”
— Jon Jafari, Rugrats in Paris: The Movie
“I didn't know Picasso was dead!”
— Jon Jafari, Route of All Evil
“I would suck a dick to get Meatloaf on this show, and I'm not kidding. If you can get Meatloaf on this show, and you want your dick SMICKETY-SMACKERED UP... and sucked too, well give me a call.”
— Jon Jafari, Green Grass and Load Screens Forever
“ECH.”
— Jon Jafari, all the time 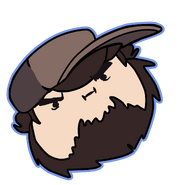 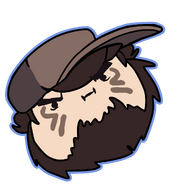 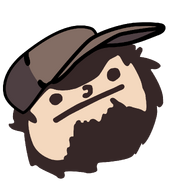