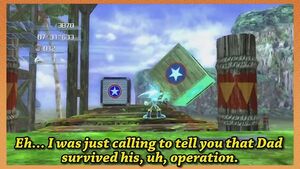 Jon's mother, Mrs. Jafari, or, as named by fans, MomTron is the mother of Jon Jafari.

Jon's mother has been mentioned a few times by Jon on Game Grumps. She appeared over the phone in the Sonic '06 episode 'Jon's Mom' (with her audio transcribed by Barry), when she called Jon while the Grumps were recording, to inform Jon that his father had survived a non-life threatening dentist appointment, and that he's passed out and Jon shouldn't call him at the moment. She hung up on Jon when he told her that the call was happening on the show (although Jon had already told her that during the phone call). Jon's mother calls again in 'Blaze the Dolphin', although Jon does not pick up this time.

When Jon mentions his parents in the Aladdin Genesis episode 'What a Mouthful', he says that his father is Iranian, possibly from Tehran, and that his mother is "Hungarian, or Yugoslavian, or some shit".