Mark Edward Fischbach, better known as Markiplier, (born June 28, 1989) is a YouTube gamer and game commentator, specializing in his playthroughs of horror games with a rapidly growing loyal fanbase, referred to by different names, most notably as "Markimoo", the "Markiplites" or the "Tickle Scrotes". He is also known for his trademark "Warfstache" composed of a pink mustache, his hair style, his glasses, and his deep voice. His channel continues to rapidly grow, becoming one of the fastest growing channels on YouTube.

Mark does a variety of livestreams on Twitch. Some are to do playthroughs of fans. Others are to meet up with fans in certain Multi-player games, and most notable ones are his charity and fundraiser livestreams where he plays games that are sometimes requested to raise money for many charities and fundraisers such as Childs Play, Cancer Research, Hospitals, etc.

Markiplier has played collaboration horror games a few times. He first did a collaboration with another popular YouTuber, Yamimash. After this, he continued and played multiple Garry's Mod custom horror maps and other Indie games with Yamimash, and played a non-horror game called Castle Crashers with 3 other YouTubers (therpgminx, CinnamonToastKen, and Yamimash). He also plays other Garry's Mod gamemodes like Trouble in Terrorist Town, Prop Hunt, Murder and Gmod Tower as well as Minecraft, Grand Theft Auto V, and many other games with his friends Bob (muyskerm), Wade (LordMinion777), Jack/Sean (JackSepticEye), CaptainSparklez, PewDiePie, and other youtubers.

Markiplier plays with a style contrasting that of many other Let's Players on YouTube while some, such as ChaoticMonki (Cry), play with a subdued, sarcastic, and sometimes panicked mood, and others such as PewDiePie play with a constantly confused, panicked, and action-packed way, Mark plays with a mixture of both. When things are quiet, he thinks and calms down before trying to solve the puzzle.

He commonly takes on an exaggerated facade of courage and bravado when clear of danger, proclaiming his superhuman strength, bravery, and incredible good looks (most prominently seen in his earlier playthroughs). He (jokingly) overstates either his gaming skills, or his incompetence with solving puzzles, and threatens off-screen monsters, and sometimes real people, with a variety of awkward - often chair-related - violence.

Upon the appearance of an enemy in-game, he often panics, giving his trademark screams and fleeing towards the nearest available hiding place. Upon the departing or escaping from the threat, his smooth attitude returns and so do his jeers of derison towards the game's antagonist.

However, on certain rage games such as Cat Mario or Give Up, and even unintentionally rage games such as Surgeon Simulator 2013, or during any nonsensical puzzle, he goes into fits of rage, usually due to the difficulty of the solution and the problematic controls, which he despises. He is often very fired up while playing such games and usually takes a while afterwards to calm down.

From time to time, Mark is referred by some of his fans as exceptionally caring and a lovable person, a reason that has been one of the main reasons his channel is so rapidly growing. Special V-logs in which Mark talks directly with his fanbase are not rare, but on October 10, 2013, after finishing the fan-made game "Ripest of Fears" Mark openly admitted that he has lost some of this contact with his fanbase while doing his best to be a good entertainer and accused himself of giving too much importance to things that really didn't matter, putting his subscribers counting ahead of himself.

One can see that Mark truly cares for his fans as, closing to the end of the video, he inadvertently showed signs of having cried during his speech and accused himself of making fun of some aspects of the game he was playing, as he admitted that some effort was put into it and that was what really mattered and thanked once more his loyal fans and promised to change back to the way he was, trying harder to reestablish some of this contact he lost by doing more special V-logs and answering more frequently to people. He also conducts monthly live streams to raise money for different charities.

Markiplier has been mentioned several times on Game Grumps. As Markiplier is known for playing horror games, Danny mentioned him in episode 3 of the Grumps play-through of Silent Hill: Shattered Memories. Danny addressed both Markiplier and PewDiePie, asking, "Why do you do this to yourselves?", with 'this' referring to playing a scary game. He was also referenced during the "Game Grumps Flight Delayed PODCAST!!" by Arin, Ross, and Barry as having introduced them to such Oculus Rift Games as "Dumpy the Elephant" when he visited the Grumps for the Table Flip episodes. Both Markiplier and Game Grumps collaborate with Polaris and have appeared on several Polaris events together, such as FriendZone, the Rayman Legends Kung Foot Tournament and the 2014 Scare to Care live stream. Also Ross and Markiplier appeared in a video by Cyndago together, and a video by JonTron together.

On December 21st, 2013 he appeared on the Table Flip playthrough of Betrayal at House on the Hill and later on March 29th, 2014 he appeared on Shadows Over Camelot.

The Game Grumps have been mentioned by Markiplier several times during his own play-through's, like in the second episode of his 7 Days to Die play-through. In the fifth episode of the same series he opened the episode by saying "Welcome back to Game Grumps". In one of his Goat Simulator episodes he asks Barry to "zoom in on that toe, Barry" and makes other Game Grumps references. During his AMA on Polaris, Markiplier said that his favorite channel on Polaris is Game Grumps. Mark was once again mentioned by the Grumps in the episode Turbo Dismount. Arin, Barry and Suzy called Mark for advice in the episode Frazzled in the Five Nights at Freddy's 2 play-through.

From January 5th 2015 to January 30th 2015, Markiplier was recording videos at the Grump Office due to his internet being down. Sometime around this period Mark changed his permanent recording location to the same office as the Game Grumps.

Mark also played Guns of Icarus Online on the same server as the Game Grumps as part of a paid promotion for the game. He and several other YouTubers uploaded their own experience with the game on their respective channels.

During October 2016, Mark revealed that Matt and Ryan had stopped editing for him and went to work for the Game Grumps, implying that he felt "alienated" from both them and the Grumps. It is still unknown whether or not the Grumps are still on good terms with him since they haven't mentioned him in a very long time, although he has since made a guest appearance in NSP's music video for Danny Don't You Know.

Markiplier appeared in the "rap-along" video for the Starbomb song I Choose You to Die!.

Game Grumps announced through their Starbomb twitter that they are back in the studio with Markiplier as a guest. He appeared as the announcer character in the song titled "Smash!" In their second album Player Select. In the song, he introduced all the Nintendo characters to a 'fun new family game' and pit them against each other in fights, narrating what certain fighters did throughout the song. The announcer in the music video for "Smash!" does not have Mark's likeness. 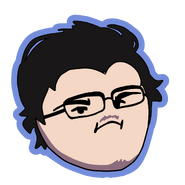 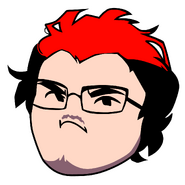 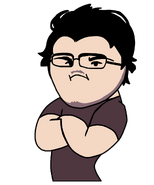 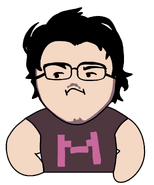 Retrieved from "https://gamegrumps.fandom.com/wiki/Markiplier?oldid=93352"
Community content is available under CC-BY-SA unless otherwise noted.