He and Ryan are the former editors of the Game Grumps and KittyKatGaming channels.

Matt and Ryan were featured as guests on the Grumpcade episode "Circus Games" with Arin, and later in No Man's Sky play-through with Barry and Brian.

Later in the summer of 2016, Matt and Ryan took over the role of editor on the Game Grumps channel, as well as KittyKatGaming and OneyPlays, after Kevin's resignation from the channel. Matt and Ryan announce this in the fourteenth episode of their SuperMegaCast, although the change was not officially announced on the Game Grumps channel until the episode "The Snowball Effect".

Matt and Ryan later appeared in the Steam Train play-throughs of Worms W.M.D and Valley with Ross.

On May 3rd, 2019, Matt and Ryan announced they were leaving Game Grumps to work solely on SuperMega.

Matt is from Charleston, South Carolina, and has a pet cat named Banana Rambo.

He attended the University of South Carolina, but dropped out in 2015 to join Cyndago in Los Angeles.

Matt was formerly the editor for Markiplier's channel.

Matt is the creator of Kids w/ Problems, a sketch and comedy channel that he co-ran with his friends Jackson Tucker, and following the end of Cyndago, Ryan Magee.

Matt and Jackson entered the Campus Movie Fest in 2015 with their video FamilyCon, and were finalists.

In April 2016, Matt and Ryan launched their gaming channel SuperMega, where they post podcasts and Lets plays daily. 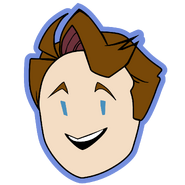