Mimi is Arin and Suzy's younger female pet cat. She is a Napoleon Munchkin Kitten purchased from judyscutiescattery.com. Mimi is two and half years younger than their other cat Mochi. Along with Mochi, the cats are often referenced by Arin and Danny during Game Grumps, as they sometimes walk in on them.

At the end of the Joe & Mac finale, Mimi appears in a "music video" to extend the length of the episode. They appear again in a "kitty cat dance party" in the tenouttaten shirt announcement. At the end of it, Jon is seen fake jerking off in the direction of Mimi.

Mimi appears in Arin's Gotta Poo, curled up on Barry's backpack, when Jon randomly walks out of the Grump Room recording a video. For various reasons throughout the show, Barry posts pictures of the cats during the episodes, such as pictures of Mimi in the Strider 2 finale and Oh Boy Oh Girl, and a picture of both cats in Jungle Jangle.

Mimi's meow can be heard in Dungeon Time, followed by Arin attempting to shoo her out of the Grump room.

They were both supposedly the final unmet player in the Civilization V playthrough on Steam Train.

During the Grumps playthrough of Shadow of the Colossus, Mimi's picture was put on the screen in one episode. There was a buzzing noise in her head while Arin explained what being smart was to her.

A picture of Mimi also appeared in episode 2 of the Grumps' unfinished playthrough of Gradius 3, before Jon told a story about her.

Mimi appears at the end of the Game Grumps' One-Off episode of Sheep, where Danny threatens to kill Mimi if the viewers do not click the link to his newest NinjaSexParty video. 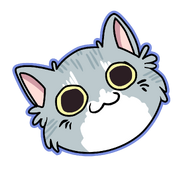 Add a photo to this gallery
Retrieved from "https://gamegrumps.fandom.com/wiki/Mimi?oldid=78710"
Community content is available under CC-BY-SA unless otherwise noted.