Mochi is Arin and Suzy's older male pet cat. He is a Napoleon Munchkin Kitten purchased from judyscutiescattery.com. Mochi is two and half years older than their other cat Mimi. Along with Mimi, the cats are often referenced by Arin and Danny during Game Grumps, as they sometimes walk in on them.

At the end of the Joe & Mac finale, Mochi appears in a "music video" to extend the length of the episode. They appear again in a "kitty cat dance party" in the tenouttaten shirt announcement.

For various reasons throughout the show, Barry posts pictures of the cats during the episodes, such as a picture of both cats in Jungle Jangle.

They were both supposedly the final unmet player in the Civilization V playthrough on Steam Train.

Mochi appeared in the Grumps' version of the end of Night Trap in the episode Super Secret Ending. 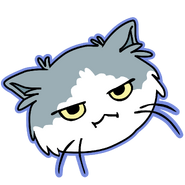 Mochi and Mimi, together
Community content is available under CC-BY-SA unless otherwise noted.