Audrey Wecht (born May 20th, 2014), is the first child and daughter of Brian Wecht and Rachel Bitney Wecht. Since her birth, she has been nicknamed Ninja Audrey to follow suit with her father, Ninja Brian.

On 13 July 2017, Audrey customised the Dad on the Game Grumps pre-release stream of their game DDADDS.

On October 31st, 2017, Audrey played Plants vs Zombies on iOS with Brian.

Audrey has already been included in Ninja Sex Party's music video for Attitude City and can be seen as early as 1:00 into the video on the wall in the background. At Comic-Con 2014 in San Diego, during a Game Grumps Q&A session, Danny noted that they will be using her in their videos as soon as they possibly can. 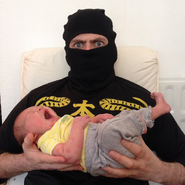 A picture of Audrey with Brian right after she was born

Father/daughter selfie!
Add a photo to this gallery

Retrieved from "https://gamegrumps.fandom.com/wiki/Ninja_Audrey?oldid=84560"
Community content is available under CC-BY-SA unless otherwise noted.