The Nintendo Entertainment System (NES), known in Japan as the Famicon, is the first home video game console manufactured by Nintendo.

The Nintendo Entertainment System (also abbreviated as NES or simply called Nintendo) is an 8-bit video game console that was released by Nintendo in North America during 1985, in Europe during 1986 and Australia in 1987.

It was succeeded by the Super Nintendo Entertainment System about five years later.

The Game Grumps do not seem to be fond of the NES; the handful of games featured are usually never completed due to difficulty. However, after Jon played Castlevania, he began to enjoy the NES and its games more. After Danny joined the show, the first eleven games they played on the show were NES games. Danny seems to be more fond of the NES than Jon, and remembers many NES games he plays on the show from his youth.

The 3-D Battles of WorldRunner

Adventures in the Magic Kingdom

The Adventures of Rad Gravity

The Legend of Zelda

Muppet Adventure: Chaos at the Carnival

Skate or Die 2: The Search for Double Trouble

Wrath of the Black Manta

Zelda II: The Adventure of Link
Add a photo to this gallery

A Week of Garfield 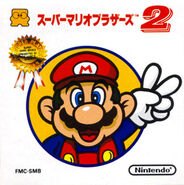 Transformers: Mystery of Convoy
Add a photo to this gallery

Kart Fighter
Add a photo to this gallery
Retrieved from "https://gamegrumps.fandom.com/wiki/Nintendo_Entertainment_System?oldid=97972"
Community content is available under CC-BY-SA unless otherwise noted.