Danny questions where a certain area in Super Mario 3D World goes, and Arin tells him to call Shigeru Miyamoto to find out. He gives Miyamoto (voiced by Arin) a call, who spends most of the call saying random things with a stereotypical Japanese accent, and absentmindedly finding himself in Mario's world. He is eventually captured by Bowser and caged alongside Peach.

Dan: Does it just lead to into the abyss over there?

Arin: Why don't we call up Shigeru Miyamoto right now.

Dan: This is, uh, Danny from Game Grumps. I was wondering if, uh...

Dan: I didn't see where you were going with that.

Arin (as Miyamoto): What words come out of my mouth-u, I dunno!

Dan: Tell me something, Shigeru.

Arin (as Miyamoto): What-a question do you want to ask-a me... 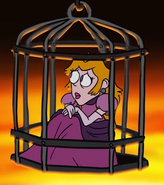 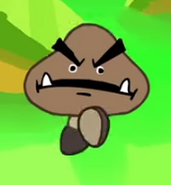 Goomba
Add a photo to this gallery

Retrieved from "https://gamegrumps.fandom.com/wiki/Phone_Call_with_Miyamoto?oldid=81736"
Community content is available under CC-BY-SA unless otherwise noted.