Jared Lee Knabenbauer (born August 28, 1985), better known by his usernames, ProJared and before that [Dungeon Master] DMjared is a YouTube video game reviewer who appeared as a guest on Table Flip in their playthroughs of King of Tokyo and One Night Ultimate Werewolf. He would later appear as the first guest on Grumpcade, playing Vice Project Doom with Ross.

Jared was born in Green Bay, Wisconsin. The elder of twin boys, he is the younger brother to Derek James Knabenbauer, known on YouTube as DKlarations. He was married to cosplay artist Heidi O'Ferrall.[1]

His show was a part of Normal Boots, a network formerly run by Jon. He reviews games on his channel, sometimes from the modern era, and sometimes from earlier consoles. He is also known to do "One Minute Reviews" of certain newer games. He also does Let's Plays on a separate channel "ProJaredPlays," where he covers newer games, as well as Nuzlocke challenges of Pokémon games.

Due to a social media fallout surrounding his personal life, Jared was on an extended social media hiatus from May to late August 2019.

ProJared was featured in the playthroughs of King of Tokyo on April 12th, 2014 and One Night Ultimate Werewolf on May 10th, 2014 on the show Table Flip.

At MAGfest 2015, Ross confirmed Jared would be the first non-Grump guest to appear on Grumpcade. He made his Grumpcade debut on February 4th, 2015 on Vice Project Doom and have been featured on several episodes since.

Starting on October 25th, 2017 and coming out with weekly episodes, Jared was the DM for the Grumps' D&D Game "Dragons in Places"

In April 2019, the Game Grumps were made aware of accusations that Jared had been soliciting nudes from his fans, and allegedly minors, which Jared later disputed. Subsequently, all videos featuring Jared were set to private, and completely removed in May the same year. The Grumps have not directly commented on the accusations.

Jared was married to cosplayer Heidi O’Ferrall until 2019. According to O’Ferrall, the two broke up after Jared was allegedly caught having an affair with Holly Conrad, former wife of Ross.[2] Jared was also accused of soliciting nudes from, and sending nudes to, his fans, including some who were minors at the time.[3] Jared responded by claiming that he and Heidi had previously agreed to a polyamorous relationship, but she changed her mind later on, and had behaved abusively towards him and Holly.[4]

Following the announcement of his divorce and the surrounding social media fallout, Jared took an extended social media hiatus starting from May of 2019. He broke his silence in late August that year with a new video, claiming that the accusations of knowingly swapping nudes with minors was untrue: One of the accusers had lied to Jared about their age, and the other had suffered a serious brain injury around the time, warping their memory of events.[5] He also theorized that the accusers had made these claims to gain clout with the Game Grumps, who were the first to be made aware of the accusations. [6] 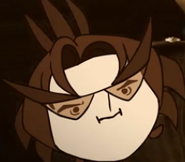 Jared's "Grump Head," as MekaDragon. As seen on the King of Tokyo playthrough. 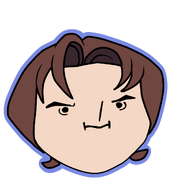 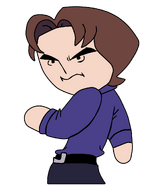 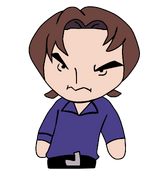 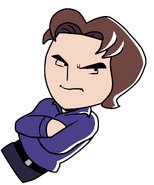