Ryan Magee (born June 14, 1994) is a YouTube game commentator, online sketch producer, and co-founder as well as former member of the sketch comedy duo Cyndago. Ryan is also co-host of the gaming channel, SuperMega, alongside Matt Watson, who operated KidsWithProblems, a sketch comedy channel on YouTube. He and Matt are the former editors of the Game Grumps and KittyKatGaming channels.

His first appearance on the channel was on the episode, Circus Games, but was not officially confirmed on the show as an editor until Sep 11, 2016 in the episode, "The Snowball Effect." His and Matt's tenure as editors lasted until May 2019, when they decided to dedicate themselves to working on SuperMega full-time.

Ryan has made a few appearances on the Game Grumps channel, almost always accompanied by Matt (with an exception of the 1-2-Switch Stout Train video) and introduced by their channel name, SuperMega. 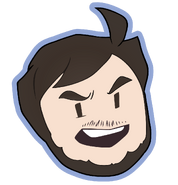