Starbomb is a band founded by Arin Hanson (aka Egoraptor) and Ninja Sex Party members Danny and Brian .

The first album was released in both physical form and on iTunes on December 17th, 2013.

Player Select was released in both downloadable and physical forms on December 16th, 2014, 364 days after the release of the first album. The album features coverage of both franchises the first album didn't cover, as well as sequels to a few songs. The songs in general contain fewer sexual themes as well.

The Tryforce was released in both downloadable and physical forms on April 19, 2019, almost 5 years after the 2nd album's release. Pre-orders were available on April 5, 2019. It features songs based on Overwatch and Dream Daddy, an anime-inspired song, two original songs, and sequels to a few songs. The TryForce is also stated to be Starbomb's final album by Arin Hanson himself, with Danny later stating in 2021 that Starbomb had "essentially finished its run". 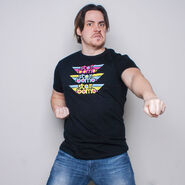 Arin in a Starbomb shirt. 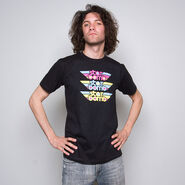 Dan in a Starbomb shirt.
Community content is available under CC-BY-SA unless otherwise noted.
Advertisement