Stout Train is a St. Patrick's Day spin-off of Steam Train. It airs yearly on St. Patrick's, and is hosted by Barry and Ross while intoxicated. Kevin made an appearance in the intro segments in 2015, and participated in the episode on Fly in the House. In 2016, Vernon of Hot Pepper Gaming and Jack the intern join the cast of Stout Train.

It has been tradition thus far for Stout Train to feature one console game a year along with the typical PC games Steam Train focuses on.

Barry: We bought too many beers

Both: So all aboard the Stout Train

Ross: and Vernon, and Jack, and Ryan. 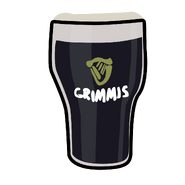 Totally not a Guinness bottle or anything
Add a photo to this gallery
Retrieved from "https://gamegrumps.fandom.com/wiki/Stout_Train?oldid=97878"
Community content is available under CC-BY-SA unless otherwise noted.