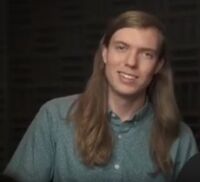 Tucker Prescott is a photographer and film maker from South Carolina that is friends with Matt Watson and Ryan of SuperMega who became the cinematographer for the Game Grumps show 10 Minute Power Hour.

Retrieved from "https://gamegrumps.fandom.com/wiki/Tucker?oldid=96298"
Community content is available under CC-BY-SA unless otherwise noted.