Vernon Shaw is a member of the Game Grumps. His role on the channel is creative development, helping the Game Grumps create projects. He also runs the Hot Pepper Gaming channel. He also makes sadistic mario maker levels.

Vernon used to work at Maker Studios, working on various projects. It was here that he met the Game Grumps.

Vernon created Hot Pepper Gaming alongside Jared Rosen and Erin Schmalfeld, a YouTube channel where they or a guest review a game after eating a chili pepper or hot sauce. Arin, Barry, Suzy, and Brian have all been guests on this show.

Long before joining the Game Grumps, Vernon was responsible for beginning the Wolf Job meme. He stumbled upon the image during a Google Image search, and Wolf Job has been a running joke between the Game Grumps and the Hot Pepper Gaming crew since. After Danny mentioned Wolf Job on Steam Train, it became one of the most popular Game Grumps memes.

Vernon and the other members of Hot Pepper Gaming appear alongside Dodger and Chad Quandt in two episodes of Table Flip, playing The Game of Things and Snake Oil.

Vernon was first revealed to be a member of Game Grumps on in a tweet late in January 2016. Vernon soon appeared on the Undertale live stream, "Final Showdown", hosting alongside Ross, Barry, and Brian, and later on KittyKatGaming with Suzy in a Slime Rancher playthrough.

Vernon's first major project with the Game Grumps was creating the "Retro Give Grumps!" live stream.

Vernon appeared in 2016's Stout Train videos, drinking alongside Ross, Barry, Kevin, and Jack. He made his debut as a host in "Girp / Clop". 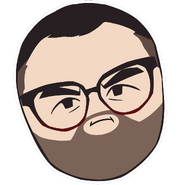 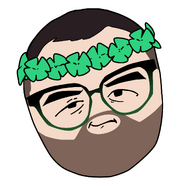 Stout Train Grump Head
Add a photo to this gallery

Retrieved from "https://gamegrumps.fandom.com/wiki/Vernon?oldid=92652"
Community content is available under CC-BY-SA unless otherwise noted.