The Wii U is a Nintendo home console and the direct successor of the Wii.

The Wii U is a video game console from Nintendo and the successor to the Wii. The system was released on November 18, 2012 in North America, November 30, 2012 in Europe and Australia and December 8, 2012 in Japan. It is the first entry in the eighth generation of video game home consoles, however this is a point of contention. The Wii U is the first Nintendo console to support high-definition graphics, capable of producing video output up to 1080p, and has 2 GB of RAM with half dedicated to the console's operating system.

The Game Grumps have played multiple games on the Wii U. Some notable long-running series on Game Grumps include, The Legend of Zelda: The Wind Waker HD, Super Mario Maker, and Sonic Boom: Rise of Lyric. Some Wii U games have been featured on Grumpcade, such as Super Smash Bros. for Wii U and Shantae and the Pirate's Curse.

The Wii U game Monster Hunter 3 Ultimate was featured in the first season of Game Grumps Present: Hunting Monsters.

Barbie and Her Sisters Puppy Rescue

Kirby and the Rainbow Curse

The Legend of Zelda: The Wind Waker HD 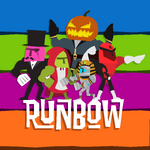 Shantae and the Pirate's Curse

Super Smash Bros. for Wii U

Wipeout 3
Add a photo to this gallery
Retrieved from "https://gamegrumps.fandom.com/wiki/Wii_U?oldid=93359"
Community content is available under CC-BY-SA unless otherwise noted.